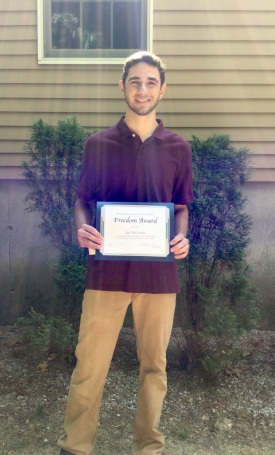 This monetary award is given to a graduating senior who is a Westford resident, who understands and actively supports traditional Republican principles. Applicants need not be registered Republicans. All graduating high school seniors are eligible including public, private, parochial and home-school students whether or not they plan to attend college, a trade school, the military, start a business or join the work force.

If you are a Westford Academy student, submit through their website. Otherwise, mail or email application to:

Thank You and Good Luck!

Gunars Zagars’s pursuit of freedom, first with his family, and later for whole oppressed nations,

exemplifies what our Freedom Scholarship represents. Gunars Zagars (1935-2018) was a faithful member of the Westford Republican Town Committee for over 34 years and was active in many local volunteer organizations including The Middlesex Club. He participated in almost every Westford Town Meeting for over 38 years (since 1973). He was married to his wife Norma for 53 years.

Gunars was born in Latvia in 1935. Four years later the U.S.S.R. invaded and annexed his home country. In 1944, when Gunars was 9 years old, he and his family escaped the Soviet communist occupation of Latvia as did thousands of Latvians during WWII. After living in Germany and Czechoslovakia, his family came to the U.S. in 1946. In those days, the Quaker community in Pennsylvania sponsored refugee families with housing and food until they could find jobs. Refugees later reimbursed their expenses.

Experiencing the oppression of a communist government and following the plight of Latvia’s struggle to gain independence, Gunars was a strong proponent of freedom. He kept track of the fate of his fellow Latvians. During the 1980s, Gunars helped revitalize a group called the “Captive Nations” which petitioned the U.S. Government to recognize the oppression being wrought against the citizens of Latvia, Lithuania, Estonia and Poland. This movement helped increase the pressure placed upon the Soviet Union, which ultimately led to President Reagan’s famous quote in Berlin, “Mr. Gorbachev, tear down this wall!”