Diehl, R-Whitman, conceded to Brady, D-Brockton after the polls closed. A third candidate in the race, Anna Ruduc, ran as an independent.

The late state Sen. Thomas Kennedy, who died in June, had held the seat since 2009. The district includes Brockton, Halifax, Hanover, Hanson, Plympton and Whitman, and parts of East Bridgewater and Easton.

BOSTON — Deep skepticism here about whether taxpayers would be stuck footing the bill for the Olympics has doomed Boston’s bid to host the 2024 Summer Games and raised questions about whether any other major American city might be willing to take on the risk.

The United States Olympic Committee said Monday that it was withdrawing Boston as its proposed bid city because resistance among residents was too great to overcome in the short time that remained before the committee had to formally propose a bid city by Sept. 15.

“We have not been able to get a majority of the citizens of Boston to support hosting the 2024 Olympic and Paralympic Games,” Scott Blackmun, the chief executive of the U.S.O.C., said in a statement as he raised the white flag. “Therefore, the U.S.O.C. does not think that the level of support enjoyed by Boston’s bid would allow it to prevail over great bids from Paris, Rome, Hamburg, Budapest or Toronto.”

Mr. Blackmun said that the U.S.O.C. intended to move quickly to prepare a bid from another city. While he did not mention Los Angeles by name, many people involved in the Olympics expect Los Angeles to enter the competition. It has successfully hosted the Olympics twice before and, perhaps most important, it already has the sports infrastructure, including an Olympic stadium, in place, unlike Boston, which would have had to build stadiums and most of that infrastructure from scratch.

Eric Garcetti, the mayor of Los Angeles, immediately expressed interest.“I continue to believe that Los Angeles is the ideal Olympic city, and we have always supported the U.S.O.C. in their effort to return the Games to the United States,” he said in a statement. “I would be happy to engage in discussions with the U.S.O.C. about how to present the strongest and most fiscally responsible bid on behalf of our city and nation.”

The mayor of Boston, Martin J. Walsh, had taken a different stance. While he had become the cheerleader in chief for bringing the Games here, he was constantly having to prod Boston 2024, the seemingly tone-deaf private local organizing group, to be more transparent, release documents, scale back salaries and make other adjustments as the bid foundered.

But on Monday morning, Mr. Walsh distanced himself from the bid completely. At a hastily arranged news conference, he announced that if the U.S.O.C. demanded that he sign a host city contract by the end of the day Monday, he would not do so, acknowledging that this would kill Boston’s bid for the Games. He said he had wanted more time to conduct his due diligence on the guarantees required and a full review of a risk and mitigation package proposed last week.

“I cannot commit to putting the taxpayers at risk,” the mayor declared. “If committing to signing a guarantee today is what’s required to move forward, then Boston is no longer pursuing the 2024 Olympic and Paralympic Games.”

It was not clear whether the mayor knew that the U.S.O.C. was preparing to pull the plug on Boston before he made his defiant announcement. But after the U.S.O.C. did pull the plug, Mr. Walsh told reporters that he thought “they might have made up their mind before my press conference today.”

Either way, the mayor was positioning himself as the voice of fiscal sanity in seeking to protect taxpayers from having to pay for cost overruns, which polling all along had suggested was the central concern of a majority of Boston residents.

In a statement after the U.S.O.C. withdrew, Mr. Walsh said he believed that bringing the Games here would have brought long-term benefits, but added that “no benefit is so great that it is worth handing over the financial future of our City, and our citizens were rightly hesitant to be supportive as a result.”

The desire by the mayor — and Gov. Charlie Baker — for more time to review the financial details ran headlong into the U.S.O.C.’s urgent need to present a winnable bid, and one backed by a majority of residents, by mid-September.

As spending by some Olympic host cities has soared in recent years — costs surrounding last year’s Games in Sochi surpassed $50 billion — many countries have pulled themselves out of contention. Enthusiasm for hosting the 2020 Winter Games is so low that only two cities, Beijing and Almaty, Kazakhstan, have entered bids.

The Summer Games, however, still attract a healthy competition. But whether an American city enters that race remains to be seen.

“The economy is strong, and the city’s self-regard is intact,” he said. “People don’t feel as if they’ve lost something. The mood is good riddance.”

Last year,  when we did the ballot question the Boston Globe rarely covered our effort to repeal automatic gas taxes. I think I am being generous with my description . Now we are trying to prohibit tax dollars for the Olympics. Once again the Globe is not on the side of taxpayers, but rather the side of big contractors and the politically connected.

Next Thursday they are hosting a debate on the Olympics. We are NOT being included!

Our organization collected over 146,000 signatures to repeal the gas tax. Despite being outspent 31 to 1, we defeated Beacon Hill and their powerful special interest groups 53 to 47%!

We have formally filed with OCPF and the Attorney General’s office. And yet, the Globe doesn’t invite us to participate.

Are you as outraged as me?

We can no longer silently take this Globe abuse!

Please join me in emailing the Globe managing editor Christine Chinlund at chinlun@globe.com

The Westford Republican Town Committee is contributing $50, the maximum allowed under our bylaws, to the Geoff Diehl campaign. The WRTC supports Representative Diehl in his efforts to prevent the expenditure of Massachusetts tax dollars for the Boston Olympic games. We will actively work with Geoff to collect signatures to take the question to the ballot and let all Massachusetts voters decide.

The WRTC urges all Republicans to support the initiative and Representative Diehl. Even the smallest contribution makes a difference in a campaign. Please contribute as you are able. 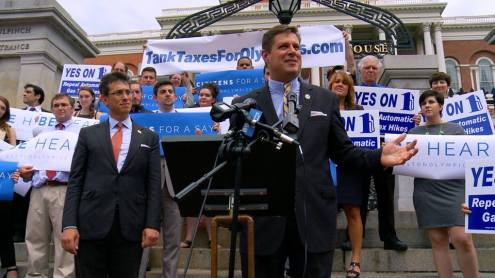 By now you probably heard the news that I will be partnering with Evan Falchuk to do a ballot question to stop your tax dollars going for the Olympics.

Just as important as repealing automatic gas tax hikes is prohibiting the abuse of our tax dollars.  The  International Olympic Committee wants Boston 2024 to sign an agreement that taxpayers will fund any cost overruns.

After reviewing the finances of past Olympics, I found that the average overrun was 179% costing taxpayers billions of dollars.  For example, the original budget for the London games was roughly $5 billion.  It ended up costing $14 billion!  China’s games cost $40 billion.
I don’t want us stuck with paying off these bills for the next 2 decades!  That’s why I’m going to do another ballot question.We shouldn’t have to do a ballot question, but we do.  The legislature has refused to pass legislation prohibiting tax dollars for the Olympics.  We all know why….

I am proud to stand up for the taxpayers and that I don’t take my marching orders from special interest groups or the politically connected.

But that does make me a target next year.

Tuesday is the end of the campaign finance reporting period.  It is crucial that I show strong support.

Would you please click here to make a donation?

Please let me hear from you today.

BOSTON — House lawmakers on Monday night rejected an opportunity to protect tax dollars from being used to directly support a bid for the 2024 summer Olympics despite stated support for that objective in the past from Beacon Hill’s top leaders.

House Speaker Robert DeLeo, along with Gov. Charlie Baker and Boston Mayor Marty Walsh, have all said they would support a ballot initiative barring the use of taxpayer money for the Olympics. Yet when House lawmakers were given the chance to do so during their first night of state budget debate the fight was left to one lone Republican.

“What we’re trying to avoid is having the taxpayers on the hook for overruns. I urge the membership to pass this amendment so we don’t have to wait for the ballot question to come about and have it passed for us,” said Diehl, whose amendment calling for a privately-funded Olympics surfaced after 8 p.m. Monday.

When Diehl asked for a roll- call vote, an insufficient number of both his Democratic and Republican colleagues rose to meet the threshold for a recorded vote. His amendment was then defeated on a voice vote. No one spoke in opposition to Diehl’s amendment prior to its defeat.

Diehl on Tuesday said he was “deeply disappointed” that his amendment fell to defeat. “Once again a ballot question is going to have to protect the taxpayers due to a failure of the Legislature,” he said.

On Tuesday a DeLeo spokesman said he remains concerned about Olympics costs. “Speaker DeLeo is focused on taking a comprehensive look at costs related to the Olympics. He is currently working with the Senate President and Administration, which is in the midst of selecting an outside consultant to study Olympics-related costs,” DeLeo spokesman Seth Gitell said in a statement after the News Service asked for an explanation from amendment opponents.

Boston 2024 Olympic bid organizers have said they intend to put together a bid without relying on public funding, except for transportation projects already in the state pipeline and federal funds for security.

Evan Falchuk, the 2014 independent gubernatorial candidate, proposed draft ballot language concerning public financing for the Olympics that Diehl mirrored in his budget amendment. On Tuesday, Falchuk criticized political leaders in the House for shirking their responsibility.

“If our elected leaders are serious when they say they don’t want taxpayers to foot the bill for the Olympics, why won’t they just pass a law that says that? Nearly all of our elected leaders want to wait for a ballot question so taxpayers can do their job for them, and it’s a stunning abdication of responsibility. On this issue, Democrats and Republicans are in bed together and, it seems, in the tank for Boston 2024,” Falchuk said in a statement.

Baker partnered with DeLeo and Senate President Stanley Rosenberg in late March to seek bids for a public consultant who could help the Legislature and the executive branch vet the plans and cost for a possible Boston Olympics. Setting aside up to $250,000 for the consultant, the three leaders said they hoped to hire someone by early May and would ask for a report by July.

Also in March, Baker said during a radio appearance that he hoped to work with the House and Senate to develop language of a ballot question that the Legislature could put before voters in 2016, obviating the need for outside activists to gather signatures and hopefully heading off the possibility that multiple questions could be on the ballot.

Baker said a ballot question should address the role of taxpayer funding associated with the Olympics, as well as whether Boston should host the Olympics at all.

Boston 2024 officials have also said they will support a ballot question to gauge voter interest in hosting the Olympics, and would not go forward with a bid unless Massachusetts resident back the games.

My Tweets
Join 44 other subscribers